You are here: Home / Events / The end of a busy year

2010 has been a huge year for me. It’ll take a while to fully comprehend what’s happened, but to summarise – and blow my own trumpet a little – here are a few of the highlights:

1) I now have a baby. She’s cute, she shouts at me, but I think she likes me.
2) In January, the final part of the Mousehunter trilogy, Mousebeard’s Revenge, hit the shops. I was really excited to see it through to the end. I always hoped to write a trilogy of books, and I have, so there. I still can’t quite believe I finished it.
3) In June, the first yeti book, Operation Robot Storm was published. The Mythical 9th Division were set free into the world!
4) In October, the second Crystal Palace Children’s Book Festival took place. We visited local schools, saw well over 500 children, and even made our very own Monster Book. It was a real success.
5) At the start of this month the second yeti book was released into the wild. Terror of the Deep is my favourite book to date, featuring all manner of sea creatures, and a yeti wrestling a sea monster on the cover.
6) And best of all I’ve made some new, really brilliant friends, and many of them have seen terrific success in the past few months.

These are exciting times and I’m thoroughly worn out. I don’t think I’ve ever been quite so tired. But to celebrate the snowy weather and the end of the year, here’s a pink penguin. 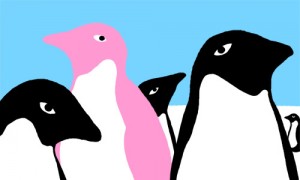