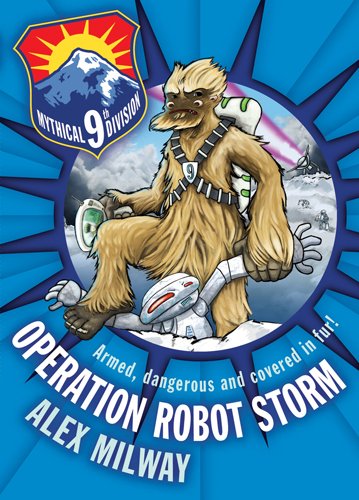 #1 in the Mystical 9th Division series

Three yetis are about to save the world, in this hilarious series.

Something strange is happening in the Welsh mountains. It should be the middle of summer, but Snowdonia has been besieged by blizzards and ice storms. A company of Arctic-trained soldiers sent to investigate has disappeared, and the only remaining hope is a secret troop of yeti agents – the Mythical 9th Division.

⭐⭐⭐⭐⭐  The whole series is pure all-ages adventuresome fun[…] sure to engage both reluctant and eager readers. – Amazon Review

Boys in particular will be drawn to this very funny tale of world-saving yetis, which is peppered with Milway’s own comic strip illustrations throughout. ― The Bookseller

fast, furious and ferry furry… the holiday read of the year ― Families Magazine

Well-written and has plenty of scope to experiment and explore. ― INIS

A wonderful read for all who enjoy a good adventure story that is sure to take you along for the ride. ― www.writeaway.org.uk

This is an exciting and funny adventure story featuring a likeable and original team of heroes. The text is interspersed with graphic novel-style pictures which enhance the fast-paced action. ― Booktrust